A new journal paper on emergency sanitation suggests Wellington region residents should be prepared to manage their own toilet waste for a month or more following a major earthquake.

If a large earthquake were to occur on the Wellington fault, the region could see lengthy outages of wastewater and road networks. Recognising this, a Post-Earthquake Sanitation Plan has been produced by representatives from Massey University Wellington, Regional Public Health, Wellington Water, Green Earth Ltd and the Wellington Region Emergency Management Office (WREMO).

Lifelines Utilities Coordinator for the regional Civil Defence and Emergency Management Group, Richard Mowll, says people may be unable to flush their toilets for one to three months following a large earthquake, and should be prepared to store their own waste for at least a week.

"Road access around the region could be affected for days to months following a large earthquake, which would reduce the ability of emergency services organisations to respond to the earthquake and would also disrupt services such as refuse collection," Mowll says.

The sanitation plan suggests a number of options for emergency toilets and states the preferred option for most people is a two-bucket toilet system.

"The 2011 Christchurch earthquake highlighted how vital it is that communities are prepared to manage their own waste following a large earthquake. Massey University and WREMO previously collaborated on a pilot of a two-bucket toilet system which found two-buckets – one for wee, and one for poo and toilet paper – to be the most viable option for residents of our region," Mowll says.

"The goal of this system is to minimise gastro outbreaks in the community following an emergency event. The result of the research we’ve completed is a plan that acknowledges constraints but enables stakeholders and communities to take preparatory steps for, and respond to, sanitation outage events."

"We have found that members of the community will need to be self-sufficient for the first seven days following an event, and then adapt their sanitation practices in the weeks and months following, until wastewater networks are repaired. The plan also includes options for those with mobility impairments, " Mowll says.

The Post-Earthquake Sanitation Plan has been printed today in the Australian Journal of Emergency Management and is available to view here.

For information on how to create a two-bucket system, or how to dig a long-drop toilet, click here.

The Wellington Region Emergency Management Office (WREMO) is urging coastal residents in Wellington and the Wairarapa, as well as anyone planning to travel around the region, to be aware of...
20/07/2022 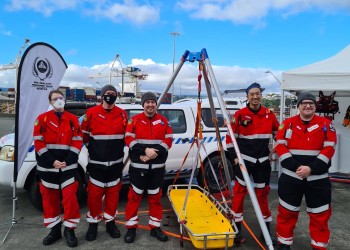